Last weekend, AJ and I went camping at Pilanesberg National Park. Well, I say camping. Our tent had a refrigerator in it. And a kettle. And power points for our mobile phones.

Anyway, together with some fellow teachers from AJ’s school we went comfortably camping at a park famous for providing visitors the opportunity to catch sight of the Big Five: Cape buffalo, elephants, leopards, lions and rhinos.

While we did manage to see a line of lying lions in the distance – we needed binoculars to find them – for the most part the Big Five managed to elude us.

This is probably because AJ and I decided to forgo the chance of getting up before sunrise and braving subzero temperatures to tour the park in an open truck. Those who did make the effort not only managed to see the Big Five but cheetahs as well. However, they were cold. Very cold. Their fingers snapped off trying to focus their Nikon 70-300 zoom lenses.

We, on the other hand, got up at a civil hour, had a hot breakfast, and entered the park about 9.30 am, courtesy of the generous school librarian and his huge red ute. Although most of the predators and large herbivores had by then decided to migrate to warmer climes, we did see plenty of impressive wildlife, including kudus, wildebeest, zebras and giraffes.

And our fingers didn’t drop off focusing our zoom lens. Not just because it was warmer, but because our camera decided to stop working, forcing us to rely on the cameras on our mobile phones.

In fact, we didn’t really have to leave our tent to see some very impressive locals. Our camping site had been colonised by a several groups of impala, vervet monkeys, chacma baboons, banded mongooses, hornbills and helmeted guinea fowls.

The impala were the most impressive of all. They’re magnificently streamlined antelopes with a colour scheme designed by an Italian fashion house. The males sport magnificent horns shaped like ancient Greek lyres. The effect is somewhat spoiled when the males start practicing for the rutting season by pretending to come to blows and blowing through their noses, sounding like a parcel of agitated pigs with head colds. 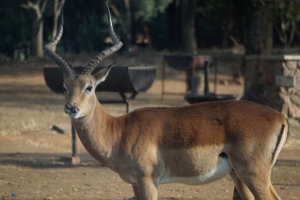 Impala cleaning his nose in preparation for a good snort.

The funniest sight is watching the normally docile guinea fowls suddenly scatter, running one way and then the other. AJ said the bird reminded her of a fusty old women from the 19th century picking up her skirts and pelting down the street.

The vervets spend most of their time high in trees or sitting like sandstone statues on the roof line of the campsite’s restaurant. They look down on their fellow primates with aloof disinterest. 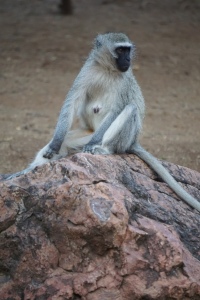 One of the highlights of the expedition was totally unexpected. We came across the ruins of an iron age kraal not far from the park’s entrance. The area’s fenced off, and if the main gate’s red light is flashing – meaning something like a lion or leopard or elephant is also touring the ruins – you’re advised to stay out. On this occasion we were the only visitors.

The kraal was built by the Tswana chief Pilane, hence the name of the park. The ruins are well signed, giving a brief history of the kraal and what the various buildings and spaces were used for. The kraal’s main lookout provided wonderful views of the park. It reminded AJ and me of some of the ancient hill forts on the border of Wales and England we visited in 2010. Although those hill forts weren’t surrounded by thorn trees. I managed to get one long branch wrapped around my left leg. It took some doing to disentangle myself, and the small wounds made by the thorns itched for hours afterwards.

Warning outside the iron age kraal.

View from the kraal lookout.

A second highlight was the visitor’s centre, where people can eat and drink on a wide deck overlooking the bush. A large salt lick is placed not far from the deck, drawing giraffes, zebra and wildebeest, although when we were there only one giraffe, the biggest, got to enjoy the lick. He’d tolerate other giraffes having a go, but didn’t hesitate kicking any wildebeest who came for their turn. The zebras were pluckier than the wildebeest, but no more successful.

A giraffe. Not a zebra or wildebeest.

The landscape between Johannesburg and Pilanesberg is eerily familiar. Geographically and botanically it’s very similar to the Southern Tablelands, especially the stretch between Canberra and Yass. It’s not surprising, I suppose: South Africa and Australia were once joined at the hip. The soft landscape is covered in grasses and acacias and other plants adapted to a hot, dry climate. True, South Africa has lions while Australia has sheep, and South African kopjes are rockier than Australian hills, but nonetheless …

The similarity even extends to bushfires. Pilanesberg hosted its own bushfire the week before we arrived, and large parts of the park were black and ash grey, again strangely familiar to anyone from inland New South Wales.

It’s not like AJ and I are looking for similarities, but perhaps a little homesickness makes you look for them instead of the differences.

In October, we hope to make our way southeast to Durban for a few days, stopping over at the Drakensberg on the way.