This blog post is titled ‘When did humans first leave Africa?’ I confess, it’s a trick question, but we’ll come back to that later.

So to start with, let’s attempt to answer not a trick question but a trickier question: when did Homo sapiens first reach Australia?

This has been a contested debate for several decades, with proposed dates stretching from 75,000 years ago to 40,000 years ago. The bottom mark was established by the dating of the remains of Mungo Man, the oldest remains  of anatomically modern humans (AMH) yet found outside Africa.

Towards the upper end, luminescence dating of sediments around artefacts recently found at Madjedbebe in the Northern Territory give a date of around 65,000 years, although this is contested.

In a recent article in The Conversation, ‘When did Aboriginal people first arrive in Australia?’, authors Alan Cooper, Alan N. Williams and Nigel Spooner state the ancestors of Aboriginal Australian first reached Australia sometime between 50,000 and 55,000 years ago, just after AMH left Africa.

This date comes from geneticists working on Neanderthal ancestry in the modern human genome. In ‘Tracing the peopling of the world through genomics’, authors Nielsen et al. write that:

‘All non-African individuals studied so far contain around 2% Neanderthal ancestry, suggesting that admixture mostly occurred shortly after the dispersal of anatomically modern humans from Africa … the date of hybridization has been estimated to be approximately 50–65 kyr ago …’ 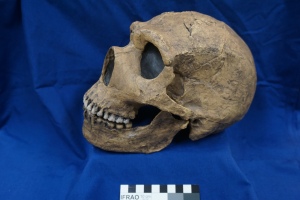 This date is now generally accepted by palaeoanthropologists.

But that presents us with a quandary. As I wrote in an earlier blog, fossils from the cave of Jebel Irhoud in Morocco, together with genetic data from a 2,000 year old Khoe-San skeleton, suggests our species arose in Africa at least 300,000 years ago. So why did it take our species a quarter of a million years to find the exit?

In a January 2018 report in Science, authors Chris Stringer and Julia Galway-Witham note that recent fossil evidence from Israel suggests our species had left Africa by 180,000 years ago. The report also recounts genetic analyses of Neanderthal fossils from two caves, Denisova in Russia and Hohlenstein-Stadel in Germany, that ‘indicate at least one earlier phase of introgression, from H. sapiens into Neandertals … estimated at 219,000 to 460,000 years ago’.

At this stage, it seems that AMH could have left Africa over 200,000 years ago, and yet DNA evidence strongly suggests the ancestors of all non-African members of our species left Africa no earlier than 60,000 years ago.

So what’s going on?

Nielsen et al. write that the latter date indicates when the ‘ultimately successful’ dispersal of H. sapiens from Africa occurred. In other words, those members of our species who left earlier are now extinct and left no trace in our genetic record.

Stringer and Galway-Witham write that there is evidence there were several humid phases between 244,000 and 190,000 years ago. But these phases were bracketed by severe periods of aridity, which meant ‘the region was probably more often a “boulevard of broken dreams” than a stable haven for early humans.’ 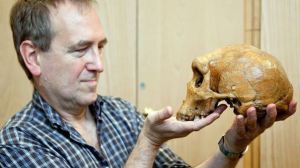 On the other hand, a letter published in Nature in 2016 suggests that earlier migrations of H. sapiens from Africa may have left their mark on some of us after all; specifically, Papuans.

After analysing ‘a dataset of 483 high-coverage human genomes from 148 populations wordwide … ‘ Pagani et al. found ‘ … a genetic signature in present-day Papuans that suggests that at least 2% of their genome originates from an early and largely extinct expansion of anatomically modern humans … out of Africa.’

This brings us back to the article in The Conversation. Cooper et al. discuss how Aboriginal Australians moved to and occupied Australia around 50,000 years ago. Of course, 50,000 years ago it wasn’t Australia, it was Sahul, a single landmass comprising Australia, Tasmania and Papua New Guinea.

The data from all this research is sometimes confusing and contradictory. Over the last quarter century palaeoanthropology has undergone a great revolution driven partly by discoveries of new hominin fossils (eg H. floresiensis and H. naledi), and partly by new and refined techniques in analysing DNA. There is a lot of data to sort through, doublecheck and assess. Nevertheless, as measurements are refined and new discoveries are made, we learn more about our past and so more about ourselves.

So, why is the header a trick question? 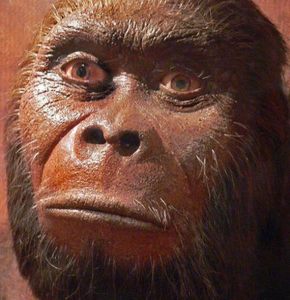 All the above information deals with the history of just one species, our own. But H. sapiens were not the first humans to leave Africa. For example, some members of H. heidelbergensis left Africa around half a million years ago, evolving into H. neanderthalensis in Europe. Those that remained in Africa almost certainly gave rise to H. sapiens.

And if the conclusions of a recent paper by Argue et al. studying the phylogeny of H. floresiensisis are correct, then another and possibly earlier human migration out of Africa occurred. This species’ forebears are closely related to H. habilis, the oldest species in our genus, Homo.

It’s almost as if the need to migrate is as defining a feature of our genus as bipedalism, a large brain and an opposable thumb.