The shock finding was made by the Fair Work Ombudsman, which also found the Chinese and Filipino workers brought to work in Australia were underpaid by more than $870,000 and housed in overcrowded accommodation.

Acting Fair Work Ombudsman Michael Campbell said the 30 Filipino and 13 Chinese workers were made to work between 9 and 11 hours a day, six days a week across three sites at Bomaderry, Narrabri and Manildra. 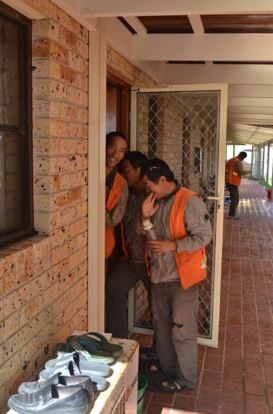 Shy Chinese workers arrive at their doss house in Worrigee

“The Chinese workers were promised $10 an hour, but were not paid for three months work, only receiving $15 a day for food,” Mr Campbell said.

As the South Coast Register and the Construction, Forestry, Mining and Energy Union revealed to the country in January, the Filipino workers had thousands of dollars unlawfully deducted from their wages for items like rent, and were forced to live cheek-by-jowl in a crowded house in Worrigee with just one toilet. The Fair Work Ombudsman launched its investigation that month.

Mr Campbell said 10 workers at a site in Narrabri lived in a worksite office and an onsite demountable with access to only one toilet and one kitchen.

Mr Campbell said Chia Tung had not come to the FWO’s attention before, and co-operated with the investigation.

“The FWO decided to seek an Enforceable Undertaking from Chia Tung to achieve outcomes that would not have been possible through litigation.

“EUs were introduced in 2009 to achieve strong outcomes against companies which accept a breach of the law has occurred and accept responsibility to fix the problem.”

In the case of Chia Tung, it agreed to back-pay all the workers by April 28. Other agreements under the EU will see the company donating $10,000 to the Philippine-Australian Community Services, apologising in writing to the workers, placing newspaper and workplace notices at the three sites outlining its contraventions, and ensuring its subsidiary companies and transferees comply with workplace obligations.

“Successful outcomes such as this also help ensure a level playing field for employers who are doing the right thing and complying with their obligations.”

“If they ripped off their workers to the tune of over $870,000 after only a few months, they obviously have scant regard for their host country,” Mr Kelly said.

“Imagine how much back pay would have been owed if the matter had not been raised by the local community and investigated by the CFMEU.

“Foreign companies like Chia Tung are treating Australia as a third-world destination for their business.”

Mr Kelly said he was also concerned that nothing was done about Manildra Group shouldering some of the responsibility for what happened.

“This is the company that allowed Chia Tung to operate in an illegal manner on their sites. What medicine do they have to take for being so negligent in their supervision?”

He stressed he was very grateful for the efforts of the Fair Work Ombudsman investigators, who “did a great job.”