I live in a compound in the Johannesburg district of Fourways, a favourite location for expats, the white middle class and the growing black and coloured middle class. Our compound is surrounded by a 2.5-metre wall topped with a ring of metal spikes and electric fencing. Our townhouse abuts the north wall. East of our house, and still in the compound, is a children’s playground and a tennis court; before the current lockdown, most weekdays I heard small children laughing and shouting in the playground, supervised by parents and nannies. I like that about where I live: it’s a community, with all age groups. 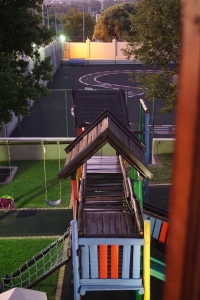 When I call it a compound, I’m sometimes corrected by locals. ‘It’s a complex, not a compound,’ someone will say. Or, ‘It’s a gated community.’

I get that. ‘Compound’ sounds like a kind of prison, except in this case it’s built to keep people out, not keep people in. Having said that, there are times when it feels like we are being kept in, especially early in the morning when I look out north and east and see glimpses of what appears a less restrained city draped across the Gauteng landscape.[i]

But whether you call them compounds, complexes or gated communities, they are small villages separated from the rest of Johannesburg by walls and wires and gates and guards. These compounds have, as Lynsey Chutel wrote in Quartz Africa, ‘created pockets of development – ranging from middle class suburbia to opulence – walled off from South Africa’s socio-economic reality.’

Compounds are not as old as apartheid, and nor is it true to say they are the spatial descendants of apartheid geography[ii], but as Chutel points out there is a direct link in the mentality behind the construction of compounds and their popularity as places to live in cities such as Johannesburg: ‘The prevalence of gated communities may also reveal what South Africans think constitutes middle class life. As it did under apartheid, it often means avoiding the poor unless they are servants, nannies or gardeners.’

As more and more black and coloured South Africans join the country’s middle class, compounds like the one I live in can be seen as the expression of economic rather than racial division, where the better off are made to feel more secure by being separated from the poor, the unemployed and the underemployed. The fact that a large number of well-off South Africans are white can blur the distinction[iii], but compounds are ultimately the concrete expression of an economic divide, and an expression of what I think is the single biggest stumbling block to a more united, more progressive and ultimately wealthier society: the unwillingness to tear down the walls. I don’t see this simply a physical problem, but more importantly, a deeply psychological one.

When I lived in Phuket, one of the things that struck me about Thai society was how the rich and poor lived cheek by jowl. A drive along Thepkrasatree Road would have us passing a palatial estate sandwiched between a two-bedroom concrete box and a refugee camp filled with tin shacks, all of them spouting television aerials and satellite dishes. It wasn’t that the family living in the palatial estate liked living next to a refugee camp, or for that matter that the refugees in the camp liked being constantly reminded of how little they owned, but that there were no 2.5 metre walls and electric fences reinforcing the division. The rich, the aspiring middle class and the desperately poor tolerated each other.

Thai society isn’t without its problems, including crime and violence, but the different classes seem more willing to share common ground, and more than willing to accept the poor becoming middle class and the middle class becoming rich. In Phuket, unlike Johannesburg, divisions aren’t fanned by a history of oppression on one side and fearful insecurity on the other.

Compounds are most common in Gauteng Province, especially its two main cities: Johannesburg and Pretoria. Divisions certainly exist in cities like Cape Town, but I didn’t see many examples of whole communities being fenced off from the world outside.

What strikes me most about South Africa and its people is its sheer potential. South Africans I have met are hardworking, smart, confident and optimistic at heart. The country has natural resources aplenty and for its size a large but not excessive population for Africa (around 60 million people in a state somewhat larger than New South Wales). The people genuinely value democracy, freedom, education, initiative and creativity. It seems to me that all the important elements of a successful society are in place; the fact that it is not yet a successful society speaks to its recent history and the scars it’s left behind.

I have to stress that these are impressions on my part, and I’m an interloper. I come from a wealthy, predominantly white middle-class background from a land far, far away. I am a member of the most privileged class of human beings that has ever lived. I have no right to give advice to anyone who lives here, to all those who have struggled through decades of repression and fear, let alone to the new generations that came after the end of apartheid – the ‘Born Frees’. I also know how hard it is to talk about a society as rich and complex as South Africa’s without making generalisations, some of which are unfair to all those who struggle every day against any division, racial or economic.

[i] The thing you notice most of all about Johannesburg is all the trees. For a city that has grown in South Africa’s Highveld, dry rolling plains that resemble the dry rolling plains around Canberra and Yass, there’s an awful lot of perpendicular vegetation. It’s sometimes claimed that Johannesburg is home to the world’s largest artificially created forest, and I can believe it. A lot of the trees are introduced – eucalypts, lillipillies, jacarandas – but the city still manages to look very African, as if at any moment the traffic weaving along the streets inside the forest could be replaced by herds of wildebeest.

[ii] Where ‘apartheid willfully set out to beggar the Black community for the benefit of the White.’ https://www.sahistory.org.za/article/johannesburg-segregated-city