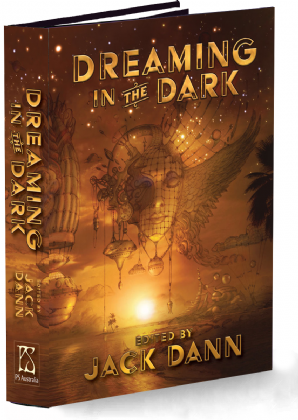 My story ‘Moonshine’ has appeared in the new anthology edited by Jack Dann – Dreaming in the Dark – put out by PS Publishing.

The story was inspired by the my grandfather’s time as a bootlegger during the Prohibition in the United States.

The following is from the story’s afterword.

‘My grandfather, Chuck Chamberlain died in 1975. Massive stroke, fell into a coma and never woke. My mother and I drove up to his flat in Stockton, a northern suburb of Newcastle, and started sorting through his possessions.

‘For a man who who was born in the 19th century, lived on three continents and fought in at least one great war, he hadn’t accumulated a lot of stuff. One of the first things we discovered was an old sea chest; inside the chest, among some old clothes, was a chair leg. I picked it up, curious why my grandfather had stored it away, and noticed a cork in one end. I pulled out the cork and a collection of false ID papers and photographs and records dropped out. My mum and I checked the false ID with the photos; it was definitely her father, but under a false name – Orville C. Parr.

‘It took my mum a few years to figure out most of the story – she never got all of it – and it turns out he’d been a bootlegger during prohibition, running grog across the Canada-US border, probably driving trucks into Detroit. He got word the long arm of the law was about to tap him on the shoulder, so he joined the American army under the name of Parr and got posted to the Philippines. When his enlistment was up, he sailed to Australia.

‘I remember him as a cigar-smoking man of few words. He was born and bred in England, spoke with an American accent, and lived more than half his life in Australia. I never really knew him. Nor, as it turns out, did my mum.’

I’d like to thank Jack for taking the story and PS Publishing for backing the anthology. ‘Moonshine’ was written over many years, and it was wonderful to find such a great home for it in the company of so many amazing stories by so many amazing writers.

Dreaming in the Dark can be purchased directly from PS Publishing.