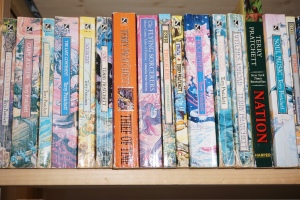 A section of the family’s ‘Pratchett’ shelf.

Terry Pratchett died last Thursday, 12 March, at the age of 66. I heard the news without surprise but a great deal of sadness. He had been ill for some time.

I’ve been reading his Discworld books ever since 1986 when I stumbled across the second in the series, The Light Fantastic. I was hooked the moment Death, answering a summons by several senior wizards, appeared with a scythe in one hand and with small cubes of cheese and pineapple on a stick in the other.

It is sad to think there will be no more Discworld novels. It is even sadder to think the world is now without Terry Pratchett.