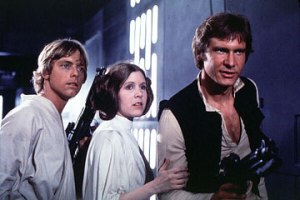 Is it a case of too little too late?

When  the original film came out in 1977, I remember reading George Lucas had planned nine sequential stories organised into three trilogies. Star Wars, since retitled Star Wars IV: A New Hope, was the first story in the middle trilogy. When this trilogy ended with The Return of the Jedi in 1983, I hoped Lucas would roll on with the sequels, the third trilogy.

I was never interested in the prequels. Who would want to sit through three films when the end result was already known?

However, my love for Star Wars got me into the cinema to watch The Phantom Menace in 1999. What a mistake. A mistake repeated twice more with Attack of the Clones and Revenge of the Sith. I watched all three from a sense of loyalty to the original and with slowly diminishing hope that Lucas would pull something out of the hat. A good story, maybe.

Now, decades later, the three films Lucas should have started in 1999 are on the drawing board. In fact, the first of the films, The Force Awakens, is out in December 2015. The fact that it’s to be directed by J. J. Abrams from a story by Abrams and Lawrence Kasdan (co-writer with Lucas of The Empire Strikes Back and The Return of the Jedi), suggests this film should have been called A New Hope. I admit to being curious to see what effect Abrams, who was only 11 in 1977, will have on the franchise. Will he rejuvenate it, as he did the Star Trek franchise with his eponymous 2009 film?

However, for me there is a single big but.

But it’s been 38 years since the first film.

To put that gap in perspective, 38 years before the first Star Wars film saw the release of The Wizard of Oz. What if MGM had produced the same pattern of sequels as Lucas did with Star Wars? It would mean the seventh Oz film would have been released in 1977, the same year as original Star Wars. Indeed, if they did what Disney, the new owners of the Star Wars’ franchise, are planning to do, the ninth Oz film would have been released around 1981. L. Frank Baum wrote 14 Oz novels, which conceivably could have seen sequels rolling out until the 90s. In fact, with Gregory Maguire’s 1995 novel Wicked: The Life and Times of the Wicked Witch of the West, they even had a prequel of sorts. A prequel with a good story, what’s more.

So why didn’t MGM produce any sequels? The story was popular enough. There had been three Wizard of Oz films made before the 1939 version, and another was produced in 1982. And film sequels were not exactly unknown. (The earliest I can date was a silent trilogy, all made in 1913, about a female detective called Kate Kirby.)

The sad truth is that ‘The Wizard of Oz’ was not a success at first, recording a loss for the studio. It wasn’t until it was rereleased in 1949 that the film went into the black. Since then, of course, it’s made a motza with repeats on television and sales of videos and DVDs.

Still, I can’t help feeling that The Wizard of Oz I: Wicked, would have been a hell of a more fun than Star Wars I: The Phantom Menace.

Here’s hoping 38 years is long enough for Star Wars to get through its self-reflective, rambunctious, acne-ridden teenage phase and mature into something really worth watching.